Well, it's been an awful long time since I was on this forum. but now I'm back and I should be a regular user. I've just joined the club officially and am looking forward to beginning work on my new project car, the only Austin Ant in Australia.

I have known about the car for about 12 years and asked the previous owner all those years ago to give me first refusal if he ever decided to sell it. True to his word he rang me a couple of years ago and we agreed on a price, with me being able to pay it off over time.

So, last Sunday (27 September 2015) I picked up the car from the Central Coast of NSW in Australia and brought it home to Geelong, Victoria on a trailer.

The car is mostly complete but has been sitting in an inoperative and partly dismantled state for the past 30 years. Due to only one out of eight bolts holding the front suspension on and both front tyres being flat and unable to hold air, it took 2 hours to get the Ant onto the trailer and the same time to get it off again.

The first job was to get a couple of good wheels and tyres on and the front suspension attached well enough to be able to move the car around. Then the windows were given a quick clean - it still has all its original 1968 glass - and the car stored for the short term while I decide exactly what to do next and in the long term.

Generally speaking, I am planning on doing a sympathetic restoration, with the mechanicals sorted and the body repainted, rubbers replaced and anything else essential, but retaining as many original components as possible. However, this will take quite some time with my limited budget and I expect it to be a few years.

The restoration will be followed in the pages of The BMC Experience magazine http://www.bmcexperience.com.au

A significant amount of original correspondence regarding the car came with it, and already some interesting things are turning up. Interestingly, in none of the correspondence, up to December 1969, is the vehicle referred to as an Austin Ant, but instead as an Austin Moke 4x4 General Purpose Vehicle ADO.19 or simply ADO19 Prototype.

I have been in touch with Roger Glover and expect to be able to share a lot of information in both directions.

This is a really exciting project and will sit well with my two Mini Vans and big-wheel Moke.

Welcome to the Club Craig.


watto wrote: I picked up the car from the Central Coast of NSW in Australia and brought it home to Geelong, Victoria on a trailer.

So, how many times did you run out of Petrol getting it home?
Old Mokers never die, they just smell that way.
Top

I congratulate you, you lucky "chap". But I do have one question, if it's Australian shouldn't it be called a termite rather than ant

?
At least can add up
Top

Hi,
Hope you can get it looking as good as this one! 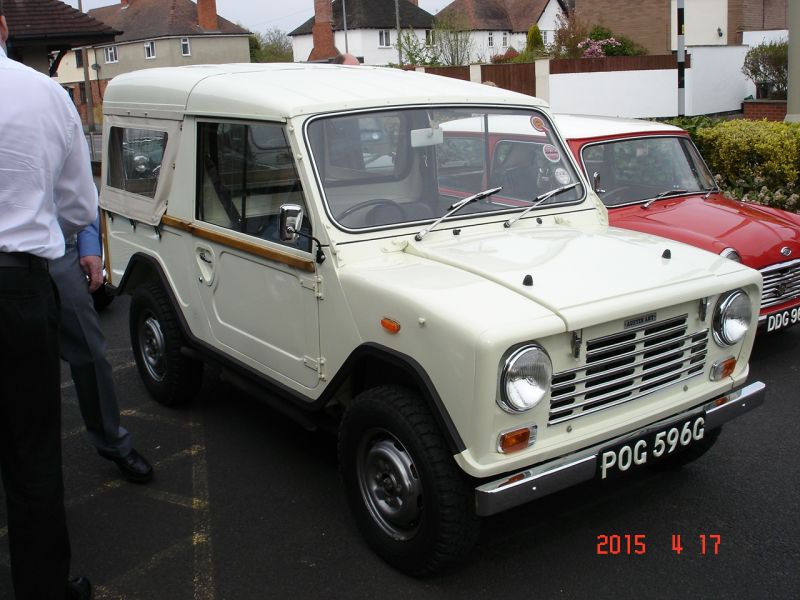 Welcome to the forum Watto.

I look forward for the restoration on the Ant

Welcome back Craig and welcome to The Club.
Earlier reports/rumours of the existence of your Ant suggested a real basket case but it actually looks in very reasonable condition.
Looking forward to more posts from you.
Dean
Top

Nigel(no top)Sykes wrote:I congratulate you, you lucky "chap". But I do have one question, if it's Australian shouldn't it be called a termite rather than ant

We do have Ants as well as Termites in these parts, though Ants will usually eat the Termites

Craig,
Good to see you've joined the club, thanks for your support.
Great to see you've posted the Ant on here, continuous updates that reflect the BMC Experience write up would be much appreciated.
I'm trying to get the two guys from the Czech republic that bought Ant #124 to communicate, but they've gone rather quiet.
I'll certainly help you all I can with your restoration, I have plenty of parts here to use as reference, such as your suspension/gearbox bolts.
As I said in the email, I'll give you all the pointers on what to watch out for, and how to avoid a potentially disastrous breakage.

They're great little vehicles, if a bit of a handful to drive, the suspension geometry does not give any self centring to the steering !
It's good to see yours has the wooden trim, I think as they seemed to produce two of each option type, that it's partner was one of those scrapped off at Longbridge or lost over time.
Please note your Ant #103 is not the third Ant produced, the numbers are not sequential but added at a later date. My '67 first series has #121 !

Don't be.
You would, after all, need a bigger shed

How would that be a bad thing?

Tim wrote:How would that be a bad thing?

I don't know. My Wife won't tell me.
Dean
Top

Thanks for the welcome everyone.

Not the third one made!? That's a disaster! I'm going to sell it....no, wait, I'm feeling better now. False alarm. It is definitely NOT for sale. Crikey, I only just got it.

Had some fun with the Ant today. Refitted the other headlight and a couple of good, used front indicators. The car looks 100% better already. The more I look at it, the more complete it appears. If only the paint wasn't flaking off so badly, it wouldn't need much done to the body at all. There is very little rust in it and what is there appears to only be surface rust. The front bolts for mounting the bumper are the worst for rust, and I will have to be VERY careful in refurbishing the thread. The bumper is in the back of the car.

This is the makers mark and date on the windscreen - first quarter 1968. All the glass on the car is dated the same, so I am confident it is all the original glass.

This is one of the side indicators - the same as on the Morris 1100 Mk2, apparently. Both are in very good condition.

This is one of the locks for the sliding front windows. Same as Mk2 Mini. Both are missing from the driver's side.

This the selector lever for 2WD or 4WD - note the Dymo labels for 2WD and 4WD (probably original or certainly from period).

I think the radiator might be blocked....makes me concerned about the inside of the engine.

Craig,
Nice try, I don't think it's 17 either !
Your paint is flaking due to (if you hadn't already figured it) the Ants being produced from Zintec sheets, ie. Galvanised as per later Australian Mokes.
Great to see you've got a full set of original glass, I've only got one door's worth !
Original dymo tape is Longbridge fitment.
Mine has an interesting piece which certainly relates to it's history somewhere along the line. Tucked in the B-post I have a dymo that says "20.5.71---OLD" someone from Longbridge suggested this was "On Loan Department", I've yet to pursue this line of investigation further.

I'll email you on some other points.

Craig,
Out of interest, have you figured out what the studs on the side of the front wings are for?
And the two pairs of things you seem to be missing?
I think yours have fallen off with age....... Oo-er !