YOUR own topic about YOUR own Moke.
Post Reply
61 posts

Super, I saw your cub in the other post. I've nearly finished this. I'm just fitting the new loom and sorting the dash out. Should be ready in the next few weeks. Stopped updating as I was getting fed up with photo bucket. I was approached by a mini magazine for an article but when I said it was a cub I don't think he was interested

he must have thought it was a genuine moke.
Top

Get your finger out and you might make the national

At least can add up
Top

Will update with pictures after the weekend but the cub has passed it's mot test today, straight through with no issues.
Been driving it around my local town, need to get used to the looks and attention! Really pleased with it,.
Top

Ok - lets do the update. FIrstly i'm sorry i've been a bit quiet on here. All will become clear, basically about 6 months ago I was asked if the cub could be ready for an event and foolishly I said yes (I say foolishly beacuse as I write this i'm still knackered after the weekend).

So 2 weeks past the Cub went for his first MOT in 3 years - and passed with no advisories which is always a bonus. The speedo never worked before so for the last few MOT's it just keeps saying 3 miles (I know the previous owner took it to France but other than that I dont think he used it much) and the first owner having completed it in 1986 didnt do much with it either from what I can gather.
So taking it to the MOT was quite dawnting, i've never owned a Mini (or a Moke or anything remotely like it - I do own a Marina but lets leave that there shall we before the piano jokes start flying in !!). so it wasquite an experiance and you cant be shy driving something like this !!!!!
The Cub is a 1275 motor removed from a 1989 Metro (this was confirmed from a check on the numbers and castings) I'm not up on the Carbs for these cars but I think it's an HIF on a uprated exhaust manifold mated to large bore rear silencer (does sound good if I'm honest) and by eck it shifts - i'm impressed.

Anyways less of the gassing and have some pics.

So as you can see I wanted to do a homage to the original Prisoner Mokes. Obviously it's a Cub and always will be but I wanted to see if I could create something that to the average Joe looked like a Moke. I was very impressed with fitting the genuine Moke parts and i'm confident if you wanted to take it to the next step that you could in theory fit a proper Moke front end. For me that wont happen as the costs would be too much and I might as well have started with a Moke in the first place. The advantage of the Cub is that it's proper solid and I wont have any corrosion issues.
I like the fact the full front end lifts off which is a bonus, if I do change owt i'd like to get the bonnet vents properly pressed.
You will also notice that some of the pics were taken at Portmerion, I was asked if the Cub would be ready to attend Festival number 6 luckily it did and was more or less ready. I had issues with the roof and seat covers (and the spare wheel cover which doesnt fit Arrgghh) But in the main I was happy with it. The mileage is now around the 48 ish mark (but it didnt work to start with probably through inactivity) but it's working fine now but overreads by about 5mph. Other than that the Cub did not miss a beat and was faultless - well chuffed.

I have to say to drive this through Porthmadog and Portmerion was a true privlege and one myself and my wife will never ever forget. I was planning to take it to the Welsh weekend this weekend but to be honest it was so stressfull taking it over last weekend and it was so damp I need a break !!!

If anyone wants any help with the AMC Cub please get in touch and i'll try and help otherwise happy Moking to you all and thanks for the support during this build.
Top

Pity we wont see you (and it) at the Welsh Weekend

, especially as the forecast is not looking too bad at the moment!
We would have loved to have met you and we would make you welcome I'm sure, never mind, perhaps see you in Ireland for the IMM 2017?

Thanks Chris - much appreciated. Must admit i'm really enjoying driving it. Drives much better than I could have imagined. Would love to drive a true Moke to compare at some point.

It looks like theres a bit of traffic coming here through my post for the Cub - if you google AMC Cub it brings this build up straight away. Not sure if this is what the Moke club wants (it still promotes the genuine Moke, but let me know if it's an issue) I'd be happy to assist anyone who has a cub. I've also been keeping a register and log of any Cubs I see on line or for sale (up to 40 so far) Guess is 500 were made. If anyone has a cub and are happy for me to add to the register please get in touch. Only issue i've seen is that there are quite a few that have been incorrectly registered (again I can help with the ID if required)

Anways i'll keep this updated as I go along and look forward to seeing you around.. BCNU
Top

Hi Drake,
You missed a brilliant Welsh Weekend! Weather was great, especially on Saturday, we had 18 Mokes running around all weekend, as well as 2 minis and a clubman! 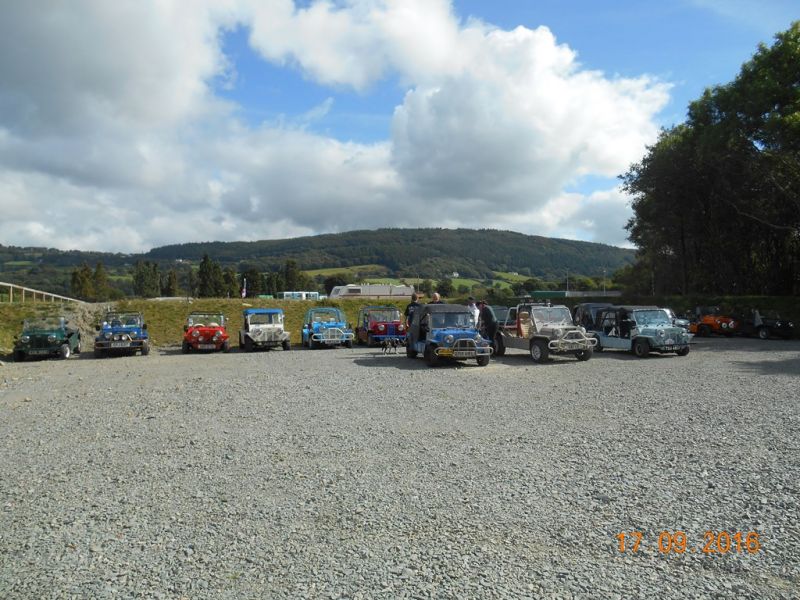 See the gallery for more pics.
So, when are we going to see you and the AMC/Moke?
There will be some Mokes at the Pistons and Props at Sywell this weekend?
Don't worry about interest in your project, as they say any publicity is good publicity!
Have you managed to sort the roof and wheel cover out yet?

HI Chris - yes both the misses and myself were gutted to have missed the Wales trip. We saw some pics on Faceache as well as those in the gallery. Looked a great event.
I just need to get used to driving it and think about how i'm going to get places - the thought of driving on the motorway does not appeal so need to study good old fashioned maps and weather forecasting before venturing out!!!

Regards the hood - obviously it's done more for effect than function - couple of issues with fitment but i'll sort over time. No pictures of spare wheel cover as only just managed to fit that. Needs more bedding in !

When we drove one morning to Portmeirion from Porthmadog it was a little drizzly so we drove with the hood up. The speedo was reading 40ish (but it's not 100% accurate) and it was also a little windy. Any faster and I think the hood would have been damaged.

Now i've got it back home ive been driving it around locally to much amusement of the locals. I need to sort the tracking out and finally fix the damper fixing (finally think I've sussed this) Other than that it doesn't need much - just drive it!!

Out of interest does owt much happen in the Yorkshire area or is it just local shows? Will be more active now it's finsihed but I need to juggle running this with my other older motors !!
Top

Hi Drake,
Is that another Cub behind yours?
I see you have the proper penny farthing emblem on the bonnet, where did you get it? I have one on mine but its not got the hood on it.
When going to events I tennd to have the roof up. It flaps about a bit but I find I can go 55-60 whereas with it down no more than 50. I have a sat nav which I ca program to avoid motorways, very useful, although I tend to plan my own route and tell it where I want it to take me. I tend to go by the speed on the sat nav as my speedo reads approx. 10% out on speed and 15% out on milage, I think it is from a mini with 12" wheels.
The National at Falmouth was a little far at 330 miles and about 11 hours with numerous stops, but very enjoyable all the same.
The coordinator for your area is Mike Cook (contact details in the mag), if you have any ideas for an event in Yorkshire you could have a word with him. There was an event up in Goathland earlier on in the year, see pics on the forum.
Where did you see pics of the Welsh Weekend, I cannot seem to find it.

The penny farthing was done by my mate who works at a decal place and based on the original design. I guessed at the size based on original pics. He made me that, the taxi decals and the village taxi screen decal.
Regards the speed, I had the screen in the upright position which didnt help. With it in the correct position and when I get the tracking done will try at higher speeds. Feels stable enough and does drive well. Much better than expected, the speedo is a miss mash of parts.Cant remember now but think the original was an 1100 speedo, but I swapped things around with a Traveller head (just for condition and to retain the original mileage of 3!!) The wheels are now 12" from 13" but the rolling radius is about the same. I'll gauge it with my speedo app and work from there. It is defo overreading though by at least 5mph that I can tell. If weather ok this weekend going to go for a spin in it so will no more then.

Referance events now it's done i'll keep a look out, will probably be next year now but will get used. The pictures I saw on Portmeirions own facebook site. There was one by the gift shop with you all lined up..
Top

I have restored a 1987 Cub which now looks great with a Union Jack on the bonnet (how do you upload photos so that I can share with you?)

My question relates to where I can find the chassis number? I need it in order to be able to complete the process of importing it into France.. All suggestions welcome. The guy who did the refurb said he thought it may be underneath - but before I go to the expense of having it lifted to check - can anybody confirm?

I've added the image you emailed me below - looks good by the way, liking the bonnet.

Regards the vehicle identifiction number (VIN) It would need to have been stamped by the builder, it wasnt as strict as it is today regards chassis stamping and Charles would not have done it. Dont waste your time looking underneath it wont be there. I've sent you an email with details of where mine was stamped and some pointers to look for - if you need further let me know.
Top

At least can add up
Top

Why not - id be happy to help where I can and yes i'm speaking to ParisMoke and she found some info from Charles that I didnt know and from that i've found out mine was the 10th built - I knew it was one of the oldest just didnt know how old so thanks to Parismoke. Can anyone beat that??
Top
Post Reply
61 posts