Thanks Dean for the info on the mag. I'll follow it up.

Re the number of prototype Mokes made. Someone involved with the experimental workshop at Longbridge, and it might have been Jack Daniels himself, once said to me that they nearly always built the prototypes (whatever vehicle) in batches of 6. That's typical British thinking. 'Oh, how many shall we make? Half a dozen? Yeh, ok half a dozen.'

On that basis for a long time I was of the opinion that 6 prototype Mokes were made in 1959. However over a period of time as I turned up various bits of information on chassis numbers, registration numbers, etc. I had arrived at a total of 10! So either my original batch theory was wrong and they had gone metric, or as I think more likely, they actually made 12. It's just that there are 2 missing out of the line up.

Incidentally when I say they made 10, maybe 12, don't get excited and think that they are all still floating around somewhere!! I know that the original twini Moke that was constructed from one of the original prototypes was scapped in December 1963. I am aware of 5 that have survived and even of the 5 there is one that I have lost touch with. It was in Tony Oliver's army museum near Windsor but the Moke was probably sold around 10 years ago. When I saw it an photographed it around 20 years ago it carried the registration number TAJ 919H. Having just checked I am unable to find this vehicle on the DVLA database. You may be asking why a 1959 vehicle ended up with a 1969 registration number? The rules are different now but my guess is that after it passed from army to civilian ownership this was the number that the licensing authority issued. That's only a guess but it's what I think might have happened.
Top

Graham, do you know anything about the Military style Mokes? I'm not sure whether they were actual production ones or some type of prototype, but some time ago on one of these Forums there was someone somewhere in Africa with one (hmm, I'm getting old) . They were like the one below, but I don't think it had the sides, like yours.

You're right about the South African connection. A chap called Simon Husband bought it but was completely unaware of its history or importance. The Moke is now painted white but otherwise is still very original. Before he knew its significance, he had hoped to modify it I think. I had quite a lot of correspondence with him and he sent through several photos. From memory this is the Moke that they demonstrated being airlifted by a hellicopter. In fact they damaged the Moke in a heavy landing and had to retouch the photo using an image of the car before it was damaged.

Graham can probably fill you in with more details.

A strange twist to the tale is that Simon got back in touch with me a couple of years ago and enquired whether I was interested in buying the Moke. I wasn't quick enough and I gather he sold it to a neighbour.
Roger
Top

Just to keep you all on the edge of your sheets there is a possibility that another short wheelbase prototype Moke has turned up, once again in South Africa. I am currently in contact with the owner and he is going to check out a few more details on it before we try to make a judgement on it. Once we know one way or the other we will go public on it.

These short wheelbase Mokes were made c.1962. Why these prototypes found their way out to South Africa I currently have no idea. Perhaps prototype is not quite the right word. Maybe a small batch was made at Longbridge and shipped out to South Africa, or made Rhodesia (now Zimbabwe) for army use and evaluation. Regretfully I have no idea how many were actually made.

One of them of a very similar design took part in the cross country motoring competition called an Autopoint that took place annually for quite a few years in the 1960s between the British Army Motoring Association and the London Motor Club. 'Oldies' out there might even remember seeing it on tv with Raymond Baxter commentating. Dare I say it, but the Haflinger was often the star of the show! Autosport, December 28, 1962 carries a report and photos one of which is of the short wheelbase Moke. The following year Jim Clark drove a Twini Moke in the same competition but that's another story!

As I have more information I'l get back to the forum. If anyone has any further questions or comments please feel free to put finger to keyboard.

Sorry in my previous post it should have read:

That 'Unknown Moke' on another recent thread, and in the Gallery, seems to have a remarkable resemblance to the picture that Tim posted above (commonly available as a postcard, for some reason). Same general style of front panel (although headlamps don't apear to have the same sunk-in appearance on both) and similar angled cut to the rear panel. Lots of details, such as bonnet fastenings, are different but is there a connection?

PJ, you are on the case!! Hopefully we are all going to know if it is, or it isn't, over the next few days. My gut feeling is that it is, but I don't want to shout my mouth of until I am certain. Once the owner gets back to me after the weekend when he has had a chance to thoroughly check over his recent purchase and take a few more photos, we will all know more.

Why am I being cautious? I don't want to fall into the trap that some of the contibutors to the forum did when those photos first appeared. Just go back and see what was said when the photos were first posted in the gallery!!!!
Top

Guilty as charged ... but your educating me Graham! ..

Bodge wrote:You're right about the South African connection. A chap called Simon Husband bought it but was completely unaware of its history or importance. The Moke is now painted white but otherwise is still very original.

That name rings a bell and it had been painted white. I'll have a search through my archive on the computer at work. I used to have a photo of it that the owner sent me.

As for the one in the gallery being a prototype, I agree that it could be, but it looks to have been heavily "repaired" at some stage, a lot of the metal work looks to have been hammered out by hand, rather than folded on machines like the factory would do. I stand by my statement that it looks home-made. I'd be delighted to hear that it was something special though.

Ok, I've located Simon's photos and posted them up in the gallery. Although both Simon's and the Unknown Moke have both been modified, they are clearly the same.

> Hi Moke List,
>
> I own a 1965 Moke 850cc short wheel base originally made for the
> military and was purchased from the South African Defence Force Air
> Base at Ysterplaat, Cape Town, many years ago after serving the pilots
> as a run around.
>
> I understand that roughly only 200 were made (BMC South Africa) for
> this particular market and the shape of the front and rear suggest
> that it was the prototype featured in early advertising and seen in
> the Moke reference manual. It has the windscreen that pivots forward
> on to the bonnet and recessed head lamps and rear number plate.
>
> It has had a thorough restoration (just before I purchased it 3 years
> ago) although a few items would be need to be changed to make it truly
> original (from white paint to spruce green, steel rims instead of the
> white epoxy rims, an original steering wheel and remove roll bar and
> replace with a canopy.

My word this crow is delicious.
Tim
Top

The images, to save you having to go looking for them. 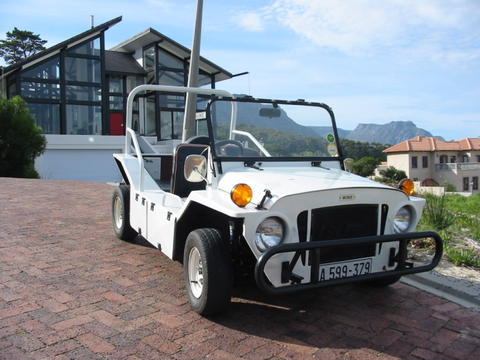 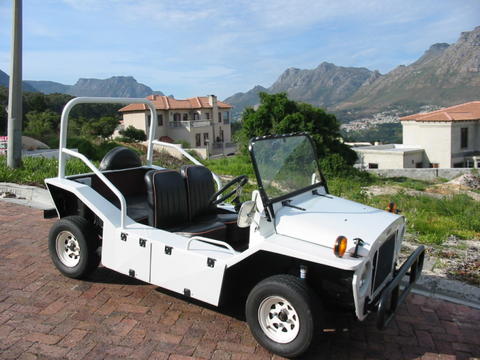 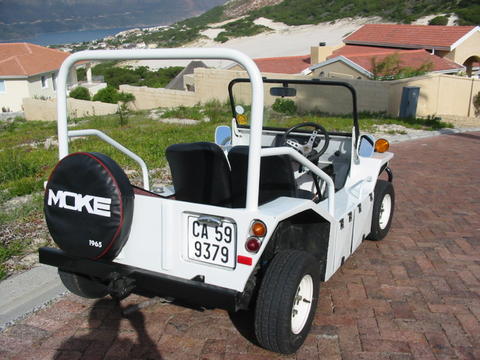 Hi everyone.
Just joined this forum after searching for general info on the newest addition to the minis in my family.

I am the owner of the other short wheelbase prototype moke that was found. It has the hinged front window and funny bonnet shape and light placement just like the white one shown here. In fact, the chassis nr differs just 3digits forn this white one (thanx Graham

). Its not at all original anymore. But quite restorable. Anybody with questions please go ahead. Anybody really keen on doing the restoration should contact me.

By the way, I need to get in touch with Simon Husband so I can see some panelling detail on his moke since correct resioration is needed for each and every panel. Including placement of welds/spotwelds. The front panel and rear light recesses on mine have been removed and replaced to be mearly functional at some stage, obviously due to damage or possibly rot.
So anybody with some contact details help a guy out. Or is he perhaps a member of this forum? I Live in Johannesburg South Africa, only about 1250km away from Capetown.
Lets see the SWB moke restored to it's former glory! Who's in!?
Top

Hi No.4 and welcome to the forum.
Simon was (is) a member of The Mokelist and most of the discussion about his car took place on there I believe. You can perform a search for everything that was posted by him at www.mokelist.org
According to him, the restoration took place before he bought it and, as Bodge pointed out, he has now sold it.
I will PM you the contact details I have for him.
Dean
Top

I snagged this gem from another message bored:

Rare footage of the Twinnie Moke. Looks like it's in it's element too!
This is Matt Jones Son of Robin.
Top
Post Reply
36 posts